This is an introduction to a new series of posts which I hope I shall be able to keep going despite my busy (read: lazy) schedule in life: Medical Pimping. Now, this particular post has been heavily influenced by the folks over at Life in the Fast Lane who blogged about the art and science of Medical Pimping here. I am not going to tautologize the topic and just give a short glimpse on what pimping means, medical school ishtyle!

Medical Pimping is the method of Socratic Learning whereby the higher up in the medical food chain feeds off the insecurity and subordination of the lower downs on the pretexts of dissemination of knowledge. Not only does this set right the hierarchical tree which is so important to maintain in order to prevent the medical world from degenerating into decadence and chaos, but also prevents the lower down from questioning the wisdom (and the authority) of the higher ups. A time honored tradition, which set balls rolling as early as 1628, under the able tutelage of Sir William Harvey, who thus described the nincompoops that were his students:

“They know nothing of Natural Philosophy, these pin-heads. Drunkards, sloths, their bellies filled with Mead and Ale. O that I might see them pimped!”

As medical students, we have not only developed an acute sense of being able to identify possible moments where we are susceptible to pimping, but also, we have developed an immune system to fight the pimping. I am not going to go into the details of the same, but if you want to know more, it would be advisable to read THE authoritative paper on the Art of Pimping which was published by Bancrati in the JAMA.

Anyways. So now that you know what the general purpose of this category of posts is, prepare to get pimped. I have always, ALWAYS, been the pimped (seeing that I was, just until recently, an oppressed intern), and never the pimper. Now that I have my own niche in the world wide webworks, I find an irresistible urge to try and pimp someone or the other. I will be posting a pimping question (which will most likely be taken from the shit I am studying – maybe so shitty that I post it out of a sense of vengeance, or rarely, it maybe a question which made sense and I enjoyed learning about it) once in a while and the answer to that soon afterwards. Hopefully, the readers (yes, you two people out there, I am talking to you) will put in some answers to match up to the questions.

Its PIMPING TIME. Get ready to get pimped!

P.S.: Sir Osler, the one physician who definitely influenced me nearly as much as Richard Feynman, was supposed to be a great pimper. What? You don’t believe me? How can you “refudiate” (thank you Sarah Palin) evidence like this? Harrummpphh! 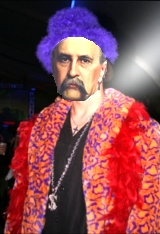 3 comments on “An Introduction to Medical Pimping”