I was trundling down Hungerford Street and was caught at the signal on the crossing the other day when I saw a car pull up alongside mine. I was a little lost in thought, contemplating my really horrific performance in the recently concluded examinations, so I did not really notice what was there beside me. However, something seemed different about the roar of the engine. So, quite absent mindedly, I turned to take a look and my eyes beheld this spectacle (this very specific car, in fact):

I was a little dumbfounded. When I found my voice, I leaned out my car and shouted at the man behind the wheels: “Hey, what is this?” And predictably enough, he replied, with a hint of mischief in his voice: “oh, its a car, of course!” Feeling a little stupid, I asked him what kind of a car it was. He replied it was an Adler, and was his great-grandfather’s.

When the lights changed, I allowed him the right of the road as I shouted out to congratulate him on this beautiful car. He roared away, leaving a fine trail of smoke behind him, and the honking and swearing from the drivers behind me brought me back to life… 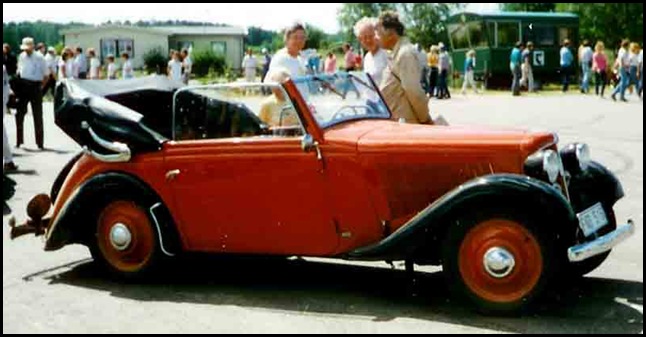 So, after that, I went on to check up more about the Adler on Wikipedia and found that it is one of the lesser known car companies from Germany. They made mainly motorcycles and also a few cars, like this beauty above (this one’s from Russia!) between 1902 and 1957. After that, they shifted gears and moved into the stationery industry. The Trumpf and Trumpf junior were front wheel drives with engine specs ranging from 995 cc to 1645cc four-cylinder sv engines. These gained many successes in races, including in the Le Mans race. (Wikipedia)

I was determined to find out who owned the Adler in question, so I went onto the Team-BHP website, which is sort of the Mecca for Indian car connoisseurs. I was of course, drawn into the fascinating world of vintage cars, and spent more than 4 hours, trawling through the vast amounts of materials contained in the site. News of car rallies, exhibitions, vintage car info, anybody who seemed to be a somebody in the world of gears and grease was in there!

And there, I found the pic of the wonderful apparition that had bedazzled me the other evening.

I think I have a new passion: Old Cars! 🙂