First up, a disclaimer. I know one of the researchers who conducted this short study personally and professionally. I admire their work and what they have done to further the cause of promoting research by medical students in India. So, this post may be a little biased, but anyways, I decided to go ahead with it because it is a very interesting topic.

Studies have shown that currency notes are prone to get tainted with illicit drugs (1) like cocaine, heroine and amphetamines. This time around, the researchers decided to look for bugs on bucks. The interesting bit would be how they managed to collect the coins.

Twenty-five samples each of currency notes and coins were collected from the general population by following simple random sampling technique. The study population included people from various occupations and walks of life, like beggars (n = 6), street food vendors (n = 11) and school children (n = 8). The samples were collected in a sterilized paper packet, numbered serially and transported to the laboratory for microbial screening.

I have some problems with this form of collection.

And as far as finding bugs in bucks is concerned, the authors note:

We have observed that 96% of the coins and 100% of the currency notes were found to be contaminated with different bacterial species, of which S. aureus, Klebsiella spp. and E. coli can be considered as pathogens, as they have been implicated in various diseases. The other isolates being ubiquitous environmental organisms rarely cause disease in healthy hosts, but have been reported to cause serious nosocomial infections in immunocompromised individuals

That is one LONG list of bugs. And kinda scary too. And when you factor in the issue that they also showed considerable amount of drug resistance, it becomes a potential threat to public health. Also, it goes to show what the range of antibiotic resistance at the community level is like.

Click on the images to view a bigger version. 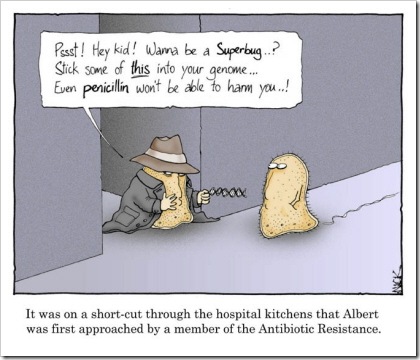 Admittedly, this is more like a proof of concept study than anything else, but it throws up several interesting questions, which makes it a nice bit of research work. Besides the fact that a more detailed study with larger number of currency denominations, culled from a more representative population would be in order to validate the findings of this study, there is one question which pokes me no ends:

What are the chances of infected currency passing on a bug to a healthy/ill person? This would actually be an important study in that it would potentially evaluate the role of currency as an agent of bioterrorism. Imagine, how poetic it is that the very currency people figuratively die to hoard would literally be the death of them. Oh how true were the sages when they said money is the root of all evil!

Imagine how insecure one would feel with the background knowledge that a terrorist outfit may have sprinkled anthrax spores or ebola virus particles or whatever on out notes? One step to not only spread death, disease and destruction, but also bring down the rather fragile economies as well! Talk about two birds with one stone!

Anyways. Moving away from the deadly musings, I would like to congratulate Akshay for coming up with this innovative topic. He has made it into the pantheons of published medical students and I cannot think of another person who is more deserving of this honor than him. If you are into reading eclectic medical blogs, then you might consider heading over to Akshay’s blog to read up on his take on a number of social, medical and personal issues.

P.S.: Will you now be reaching for the hand sanitizers after handling money? How inconvenient would THAT make your life?