F**k you SRK. Bah. Got that off my chest. Anyways. Now to discuss the match.

This pic from ESPN CricInfo more or less summarizes the events of the day: 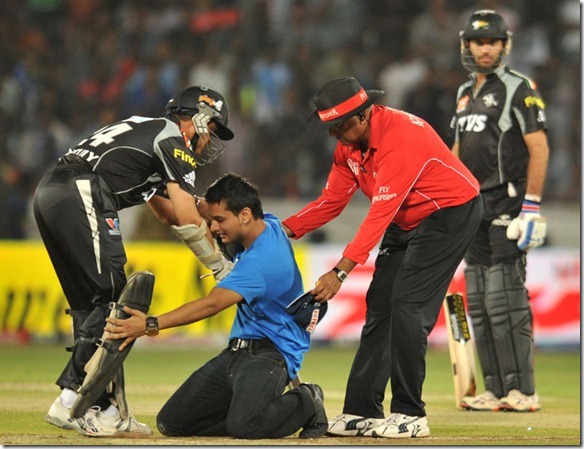 Following the fall of Robin Uthappa, this emotional fan breached the security and invaded the pitch to throw himself at the feet of Dada. Oh, by the way, this match was not held in Kolkata…

This was a dead match and the only drama left in the game was to see how Sourav Ganguly, three time Knight, performed for his new franchise. Somehow, Pune Warriors, which started off well, but then went into a slide of epic proportions was playing like an entirely different team today. Call me biased, but somehow, today the field placing was accurate, the angles were well covered, the runs were being cut off and the changes being rung in as and when needed. Yuvraj Singh, who had pretty much been the sole performer in the squad thus far, seemed to be more comfortable in the role of captain this time around.

After the DC got off to a rollicking start, the Pune switched to spin with immediate effect. The Kumble-ish leg spin of Rahul Sharma, combined with the pie-chucking of Yuvraj tightened the noose on the Deccan. The duo bowled extremely well, as has been the case for the greater part of this tourney. I must say Rahul Sharma is a very interesting find, and thanks goes to the IPL for unearthing his talent. It may have otherwise taken him several months, if not years, to rise through the successive ranks of the bureaucracy of Indian cricket.

Deccan started with a bang but ended with a whimper as they finished with 136-8 when their allotted 20 overs ran out. One instinctively knew that this was not enough, even with the fiery pace of Dale Steyn to contend with. Things were made even easier by Jesse Ryder who almost nonchalantly stroked 35 runs off 20 balls before falling to Ojha after missing an attempted slog sweep.

This meant that the much awaited return of the Knight turned Warrior was impending. It was such a surprise to see the buzz in the stadium rise to a roar when Dada walked out, his characteristic swagger much mellowed. It was much later, in the post-match interview with Danny Morrison (who held the record for the most number of ducks, if I am not mistaken, for a long time) that he admitted that it was the most difficult day in his entire cricketing career. This was coming from the man who had seen it all happening around him. He had been in more upswings and downspirals than any other cricketer and I am sure, few cricketers can boast of the stark contrasts his career has been through. When that man admits that it was a uniquely difficult situation, you have to wonder just how hard things were.

He admitted to have had no practice in the past 5 months and the world had written him off, officially. But when he danced down the track to Amit Mishra and launched him over mid wicket for his trademark Bapi bari ja sixer, the crowd went into raptures, irrespective of the side they were supporting.

Somehow, I think Dada’s return was an immensely influential thing. Irrespective of which team’s flag you were waving, when Ganguly launched the sixer, every spectator seemed to cheer. The roar was so loud that I was shocked: if I had not known that the match was being held in Hyderabad, I would have believed it was just another day at the Eden Gardens.

Ganguly is not perfect. He has his fallibilities. Perhaps more so than most cricketers, but, somehow, his dogged determination to stick it out is inspiring. On a personal level, he once again taught me the value of not fretting and staying on top of one’s business. After all, all we can do is the karma, the results are beyond our control.

4 comments on “Ganguly: The Comeback Man”