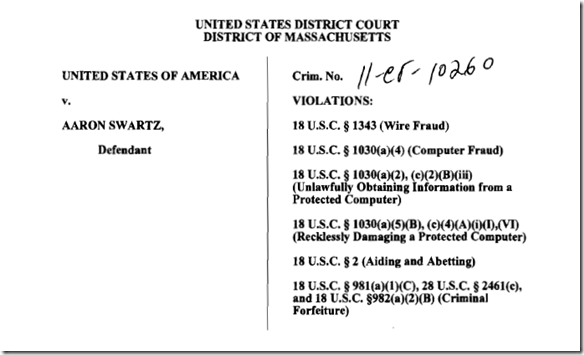 Aaron Swartz has been formally charged with a set of violations based on his hacking the MIT mainframe in order to get into JSTOR’s archives and downloading a large segment of JSTOR’s published materials with the purpose of distributing them through one or more file sharing sites. Ars Technica has run a blow by blow account of how he managed to do it here. The full document is available here. Here is a snapshot of the overview of the offenses for which he is being charged:

Now while I agree that the methods he employed were questionable I fully and completely sympathize with his views on the scientific publication industry.

In a guerilla manifesto on open access largely attributed to him, Aaron Swartz states (1):

There is no justice in following unjust laws.  It’s time to come into the light and, in the grand tradition of civil disobedience, declare our opposition to this private theft of public culture.

I have time and again, been foiled by the pay walls behind which articles I sought were hidden, so I realize where the anger in this manifesto is coming from. A lot of people are asking, and not without reason, too, whether he could have raised these questions in a more formal and legal manner. I believe he could. As someone who had been a part of a paradigm changing development when he was merely 14 years old (he developed RSS 1.0), I am sure he had the ingenuity and the ability to raise the issues in the proper fora, in the manner prescribed.

But would it have had any impact?

His outrageous act has raised a storm. People are talking about it, writing in their blogs, discussing on Twitter, how the “big pub” is monopolizing the treasure troves of knowledge. Today we are discussing why be held hostage at the hands of the protectors of copyright, the makers of unjust laws, simply because of his law-defying act. [Note: While it has attracted the attention it needed, yet, I must admit, at the pit of my stomach, there is a lingering discomfort arising from embracing a method which is legally questionable.]

In a world where we take an aeon to prosecute an Ajmal Kasab or fail to indict people involved in Bhopal gas tragedies (very Indian examples, I agree, but examples nonetheless), we are so prompt to jump down the neck of someone who is just doing something akin to checking out too many books from the libraries…

Scholarly publishing is indeed a confusing concept. Greg Maxwell, says it all when he states (2):

Academic publishing is an odd system — the authors are not paid for their writing, nor are the peer reviewers (they’re just more unpaid academics), and in some fields even the journal editors are unpaid. Sometimes the authors must even pay the publishers.

And yet scientific publications are some of the most outrageously expensive pieces of literature you can buy. In the past, the high access fees supported the costly mechanical reproduction of niche paper journals, but online distribution has mostly made this function obsolete.

As far as I can tell, the money paid for access today serves little significant purpose except to perpetuate dead business models. The “publish or perish” pressure in academia gives the authors an impossibly weak negotiating position, and the existing system has enormous inertia.”

In a scathing step to protest against Swartz’s arrest, he has uploaded the whole bunch of papers from the Philosophical Transactions of the Royal Society, onto piratebay.org, a peer to peer file sharing site. You can access these files, all 33 gigs of them (18, 592 files, in all) from here. I have started downloading them and I believe in a symbol of protesting this unfair system, you should too… as a token od support for the Aaron Swartzes and Greg Maxwells of today.

It is a sad and inconvenient truth that the institutes and bodies charged with the responsibility of being the agents of dissemination of knowledge are, in fact, becoming the hoarders of the same. Hidden behind pay walls, closed access and open access under a plethora of added conditions, it is a sad situation where we often see scientists having to ask around for a copy of the very same article that they themselves published (for they do not have access to their own work). I just hope that Aaron Swartz’s recklessness (3) does not take the focus away from the problem, because many people are trying to impeach him and divert the attention from the real issue at hand. [Note: while I am tempted to make references to Gandhian tactics of civil disobedience and voluntary incarceration afterwards, I am not going to do that to avoid more misdirections and more unnecessary debates on equating the two of them, although in my eye they were, on principle, doing the same thing].

Under the immense pressure from academia to either publish or perish, academics who are wending their way up the pyramid, who are lower down in the food chain of scientific eco system, are forced to accept whatever incredible copyright offers they are handed by the big pubs in order to gain that scientific credibility that is necessary for the furthering of one’s career and life.

In the face of this, I would therefore, like to come out in open support of people like Aaron Swartz and Greg Maxwell, who give the guerilla warfare for open access a name and a face. I come out in support of Reference Wanted, #IcanhazPDF and any other such effort which eats away at the opprobrious act of holding wisdom hostage for money…

If I can remove even one dollar of ill-gained income from a poisonous industry which acts to suppress scientific and historic understanding, then whatever personal cost I suffer will be justified . . . it will be one less dollar spent in the war against knowledge. One less dollar spent lobbying for laws that make downloading too many scientific papers a crime.

3 comments on “Aaron Swartz and the Open Access Civil Disobedience”