Forgive the hyperbolic title. Do not take offense and read on before hating on me. Please note the post script for added justification for this inflammatory title, if you so feel. Thanks. Now on with the main show!

Not the best known of neurologists, history has not been very kind to this amicable gentleman, who was, like many other physicians of his era, a very musically and

artistically gifted person (1). His most significant contributions were in the field of the cerebral blood circulation which not only added volumes to the knowledge of the anatomy of the human body, but also furthered the study of Neurology as a discipline. He was, along with Alexander Kolisko, responsible for defining the anterior choroidal territory. (2)He is probably the most well known for the eponymous neurological sign which is characteristic for the presence of a lesion at the level of T10, but arguably, he had more significant contributions in the fields of cerebral localization and the blood supply of the brain. However, Beevor’s sign remains one of the most commonly used clinical tests to localize level of spinal trauma and his contributions in the other fields have become marginalized.

His interest in neurology can be traced back to his training under famed neurologists of the day like Wilhelm Heinrich Erb (of Erb’s point and Erb’s palsy fame!) and (neuro)pathologist Julius Cohnheim.

In 1898 he published a very definitive and authoritarian textbook on Neurology, titled Handbook on Diseases of the Nervous System.

The eponymous sign is one of the last vestiges of this great academic in clinical medicine. The description of the sign is pretty typical (3):

‘When a patient sits up or raises the head from a recumbent position, the umbilicus is displaced toward the head. This is the result of paralysis of the inferior portion of the rectus abdominal muscle, so that the upper ﬁbres predominate pulling upwards the umbilicus’.

Here is a video on how to administer the test:

Here is a good example of what a positive test might look like from a real life case report (4): 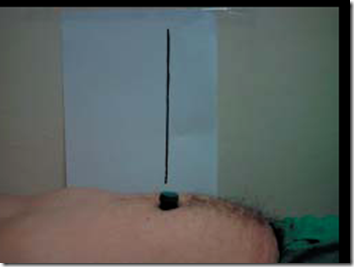 Beevor’s sign is also  described inter alia in amyotrophic lateral sclerosis and fascioscapulohumeral muscular dystrophy (3). It is said that in the diagnosis of FSHMD, which is the 3rd most common type of muscular dystrophy, it has a whopping 95% sensitivity and 93% specificity! (5,6)

No wonder this sign has kept his name alive!

Now to come to the final contribution that I wanted to highlight. In 1885 another “exotic” neurologic manifestation was first described by Beevor in the company of another

neurologist, Armand de Watteville: the jaw jerk reflex. The ﬁrst patient was a woman with amyotrophic lateral sclerosis who had an increased jaw jerk, which he demonstrated by introducing ‘a tongue depressor or paper knife in the mouth’ and striking ‘either object with a thin bound book or best of all with a percussion hammer’ (7). However, there is a lot of doubt over this matter, since Watteville had noted (without any references) that it was first elicited in a patient in America. Other researchers have unearthed the fact that the American Neurologist, Morris James Lewis, may have been the first person to have elicited this jerk. Although not a part of the standard clinical examination, the jaw jerk reflex, like most obscure things, held a very important place for us during our practical examinations. This rarely performed test was routinely asked to us by examiners…

This highly respected physician worked with the best and most well known researchers in his day. Born to a highly respected surgeon, his father was a fellow of Royal College of Surgeons, and trained by a multitude of celebrity teachers, he was destined to be one of the heroes of clinical medicine. Yet, time, has marched on and Beevor has been relegated to the realms of obscurity, remembered by clinical romantics like me who dig up the names and faces behind the clinical signs that intrigue them.

P.S.: Now I guess you know why I titled the post in this fashion? The sign = Beevor’s Sign, Bloody = Cerebral circulation and Jerk = The jaw jerk reflex. No disrespect intended. Like all marketing gimmicks, this name was made up to raise some eyebrows and get more people to read about a wonderful clinician who is now largely forgotten.

16 comments on “Charles Beevor: The Sign of a “Bloody” Jerk”