“There is no greater reward in our profession than the knowledge that God has entrusted us with the physical care of His people. The Almighty has reserved for Himself the power to create life, but He has assigned to a few of us the responsibility of keeping in good repair the bodies in which this life is sustained.”

On March 30, 1842, Crawford Williamson Long administered ether on one James M. Venable during the removal of a tumor from the neck of the patient. He used ether a second time on Venable and subsequently used it to perform childbirth and amputations as well. He published his results in 1849 (1) but by that time another controversy had broken out. William Morton, in a publicity stunt, delivered ether anesthesia on a patient in front of a roomful of viewers in Massachussettes General Hospital in Boston on October 16, 1846. Morton would spend a large part of his life after this event trying to eke out his name as the discoverer of ether anesthesia. A bitter scuffle was to break out for the credits for this pathbreaking application between Morton and Long when long applied to the senate in 1954 to recognize his claim of the discovery of ether anesthesia. (2) Anyways, Morton got to his credit the Ether Day or Anesthesia Day (celebrated every October 16th) and Long had to wait around till 1933 to get some acclaim. 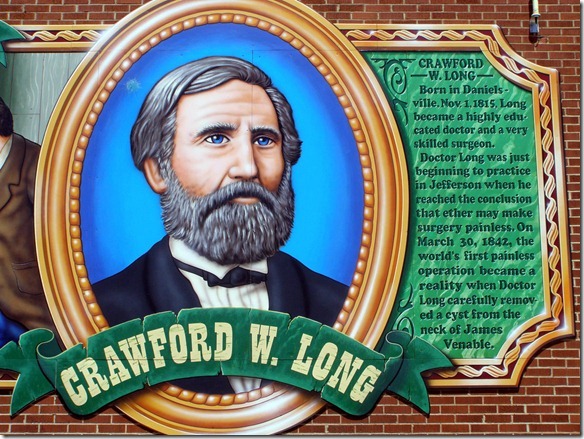 In 1933, Eudora Brown Almond, wife of Dr. Charles Almond, decided to set aside a day to honor physicians and picked the day Long had administered anesthesia. It was celebrated unofficially for a long time, until on October 30, 1990, US President George Bush signed the declaration that March 30 was to be celebrated as National Doctors’ Day.

However, back in India, we do not follow this norm.

For us, the Doctors’ Day falls on July 1, the day of birth (and demise) of legendary physician Dr. Bidhan Chandra Roy.

Anyways. I decided to speak about the US National Doctors’ Day because today’s post has a lot of bearing with the perils of being a doctor.

DISCLAIMER: Please keep in mind I do not have personal experience with any of these incidents and am relaying information that has apparently been suppressed by the media. So do not hound me for evidence or spam me with hate mails. Do not kill the messenger. Try to find out the truth and if you can convince me that I am wrong and this account is biased, I will enforce a retraction.

Of late, a lot of negative news have been coming up about doctors, one of the most treacherous of which was the news that a junior doctor had raped a minor, mentally challenged, deaf mute female. On the face of it, this is a ghastly allegation and any person who takes advantage of such a helpless victim should be condemned, be he a doctor or not.

But it turns out that there was nothing of the sort. The patient had come in with complaints of chest pain and the doctor apparently tried to set up an EKG. The patient, unable to understand the portent of the examination got agitated and then the family, with some external stimulus raised hell. The name of the accused doctor was splashed on the first page of the dailies the next day and everything went haywire. Subsequently, it appears that the victim was unable to identify the patient from a parade and the courts threw the case out. An independent investigation by the doctors revealed that the accused had not done any of the alleged misdeeds. if anything, in his hurry to assure proper administration of care to the patient, he had not properly “counseled” the patient and her family about the full portent of the EKG and how it was to be administered. 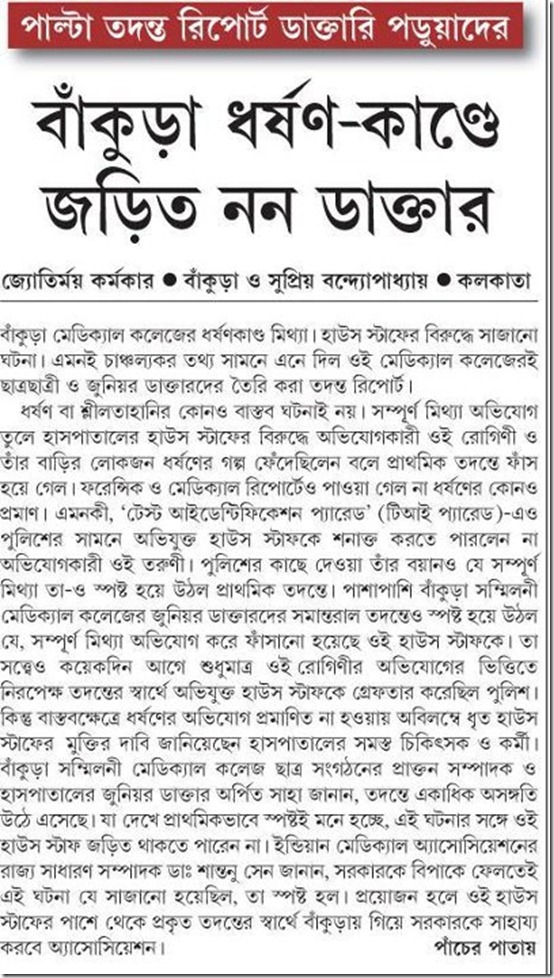 Thankfully, the fictitious case has been quashed and the doctor has been released from incarceration, but could anyone tell me, how he shall repair the irreparable damage caused to his reputation?

Now coming to the event of junior doctors beating up journalists that got a lot of media mileage today, I must say I was shocked to see the news. Now experience tells me that most, if not all, medics are way too beleaguered with their own problems to create ruckus by going around lynching reporters. We are not that dumb, you see. We all have passed examinations requiring a lot of brain power. So we know that beating journos up does nothing to augment our image or make our lives easier.

The other side of the story came out on Facebook today. Apparently, a patient of bronchopneumonia was brought into the hospital and despite institution of treatment, unfortunately, the patient died. The family members were understandably in shock. Using their anger and shock at the death of a loved one, some bystanders instigated them against the doctors and then all hell broke lose. As the mob turned on the poor doctor on call, he was forced to inform his friends in the hostels and ask for help.

There were previous incidents where the junior doctor had literally been pulverized by an angry mob and understandably, the poor fellow did not want anything like that to happen to him. Naturally, when the “reinforcements” came in, there was exchange of blows. It appears that the media conveniently forgot to mention that the whole issue was instigated by the third party – whoever they were and whatever their ulterior motives were.

I have personally seen people come into the ER and start clicking pictures of patients as I tried to run around and treat as many people as I could. A few days ago, a friend of mine reported a similar experience from the state’s apex Government hospital. I never tried to stop them because I knew the moment I did anything like that I would be in trouble.

Apparently, the “free press” in the peripheral medical colleges also demand access into the operation theaters and labor rooms. Now I am all for the freedom of speech and freedom of press, but this does seem a little too much – especially considering the fact that they are probably trying to raise some kind of problems with their poking around. I am not against investigative journalism, but cheap, populist agendas like these are very hurtful.

Finally, the thing that we all say is that junior doctors are not supposed to be responsible for the shambles that the healthcare system is in. We used to find patients from faraway parts of the state come in with life-endangering diseases without any primary treatment because their local health centers did not have adequate diagnostic aids or medicines to treat them. When these patients come in, and then die, the hell raised is to be faced by the junior doctors for no fault of theirs.

Doctors are the face of the healthcare system. The truth is that, for every unfortunate death, there are a thousand lives saved. For every missed diagnosis, there are a thousand critical ones made. Mistakes happen. We are but humans and as humans we are prone to err. We realize that the costs of our errors are probably more expensive than those of any other profession’s, hence, we try our level best to be on our toes, to be on guard and not make errors. But even then, they do happen. I am not saying all doctors are sages. I am not saying we demand the public prostrate themselves at our feet and praise us… no, not at all. All that I am saying is that give us the respect that you would accord to another human being. Is that too much to ask? 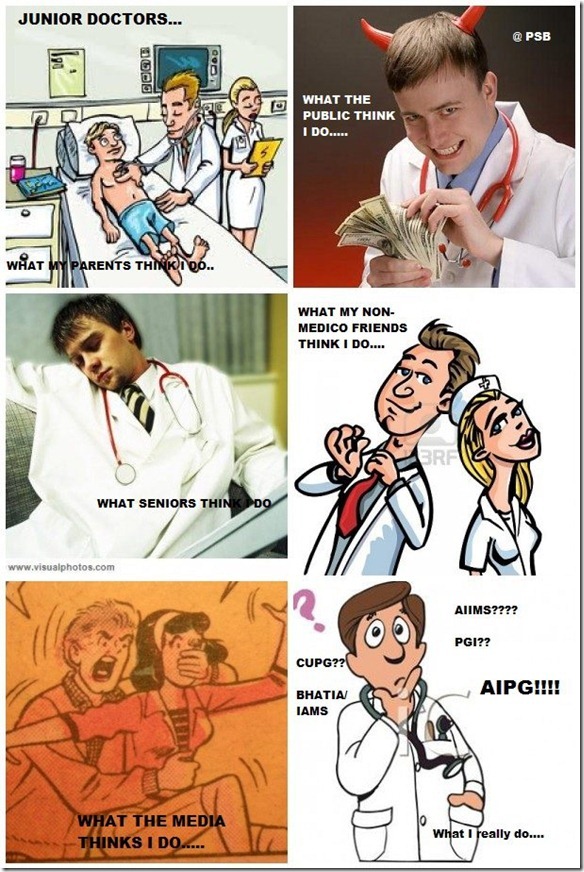 1. Long, C. W. (1849). “An account of the first use of Sulphuric Ether by Inhalation as an Anaesthetic in Surgical Operations”, Southern Medical and Surgical Journal, 5, 705–713