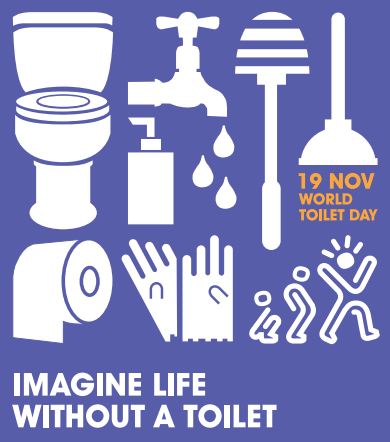 Happy World Toilet day. As a dear friend reminded me today, it is the day the World Toilet Organization has earmarked for spreading awareness about the lack of proper sanitation and potable water which is killing a large number of people (someone on a poster contended the number was 1600!) everyday the world over.

The activist-information site Water.org contends that, the world over, women spend 200 million hours in collecting drinking water for their families, which may not even be of potable quality in all cases. Having seen an inkling of the water crisis in Delhi this year at the peak pf summer in May-June-July, I am sure the situation can be horrifying in the arid areas of Africa and arid, rural India. Click on the image below to read more about this issue from the water.org site itself.

Approximately 2.6 billion people all over the world do not have access to safe sanitation systems. This leads to improper defecation and disposal of the feces in water bodies from where drinking water and water for other household activities are eventually collected. This leads to a serious problem where a vicious cycle is set up. Indeed, the only way to disconnect this cycle from turning over continuously is to find a way to introduce proper sanitation systems globally. 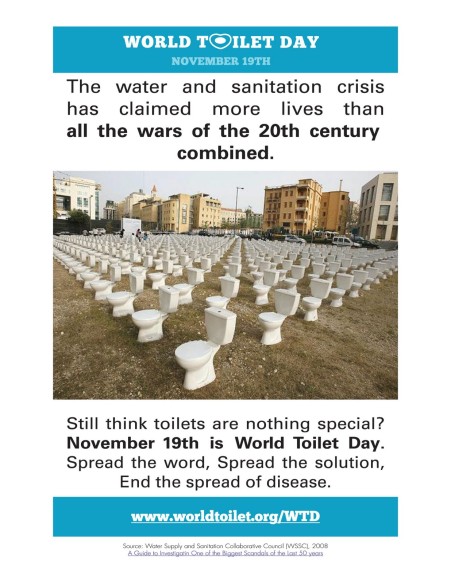 For a nation that seems to be obsessed about its bowel movements (the number of people we see at the urban health care centers with various complaints about this issue is staggering) India has done remarkably badly with respect to implementation of proper sanitation, especially in the rural areas. In fact, I remember hearing the story from someone that in certain villages, the habit of “going to the fields” is so entrenched, that despite the erection of a public sanitation building in the village, the people would still choose to answer nature’s calls out in the open. Anecdotal though it is, one may argue that it is not too much of a stretch, considering the cultural heterogeneity of our country. 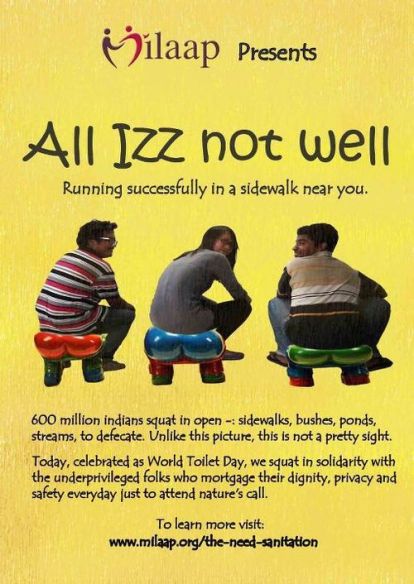 Some of my colleagues found it really very funny when I, in all seriousness, informed them that today was World Toilet Day. Thanks to our occidental proclivities, we have a certain disconnect with the ground realities that challenge public health at the very grassroots and I firmly believe that poor sanitation is one of them. The fact that physicians at one of the best institutes of the nation, some of whom are slated to become public health professionals in the future, take such a merry approach to such an inglorious yet troublesome problem.

The problem in India is further amplified by the huge population. The sheer pressure of numbers is mind-numbing. The water.org site contends that there are 839 million people with no access to sanitation services, and 128 million with poor access to safe drinking water. They quote World Bank statistics that 21% of the infectious disease burden in India can be ascribed to unsafe water. And it may not just be an access issue. People need to be made aware of the need to drink safe, clean water. And for us, well, I can most certainly say that charity begins at home. Most often, when we find diarrhea cases in our health center, we provide them adequate care and advise them about the need for safe drinking practices, in addition to drinking safe water. Often, I find that they do not take care of the small things. Keeping the drinking water covered. Using a designated pot-with-handle to dispense drinking water. Cleaning the vessels. Using proper decontamination techniques when the water quality is suspect. Treating the disease is good, but uprooting the ignorance at the root of the disease is more important.

So, crack a poop joke or two, and then get involved. The change can come from us. If we take care of the small things, the larger ones, even if they do not take care of themselves, will become less of a challenge.

And finally, I leave you with this question:

8 comments on “World Toilet Day: Give A Shit”

Our favorite blue jay has something to say.
The cicadas are here!!!
Changing of the guard. #charmcity #baltimore
Fishing for compliments. #FoodMoods
Trail hopping. #CharmCity #Baltimore
Treatment for homesickness. #BongFood