Yesterday, my friend and medical blogging maestro, SoumyadeepB brought this to my notice:

So, apparently, the National Institute of Epidemiology got hacked by a member identified as what I think reads as Haxorioux Mind who apparently belongs to a high-profile group of hackers called Team Madleets. They identify themselves as white hat hackers. White hat hackers are computer security experts who believe in making website owners aware of the weaknesses in their site security and are not fuelled by malicious intent.

This group has also hacked high profile sites, according to their Facebook page, which claims responsibility for the following:

So, they have a rather funny meme-toon about their repeated encounters with Google:

This is the first time, to my knowledge, that a .gov.in site has been hacked. Indian National Informatics Center sites have been hacked multiple times before, most famously, by the online Hacktivism group called Anonymous, who took down the e-governance site as a token of protest against rampant corruption in all walks of life in the nation, and replaced it with a page showing this:

There are many sides to this debate and though my rebel spirit supports the spirit of white hat hackers (or simply hackers as some prefer to call the black hat hackers or illegal or criminal hackers as crackers and those on this side of the legal divide as hackers) and hacktivists, sometimes, I hear this lurking voice at the back of my brain, that reminds me of Neitzsche’s famous words:

So, on some days, I feel very pro-hacktivism when, as a common man, with the illusion of empowerment, but no real empowerment as such, I feel frustrated with a machinery that rolls on along at its own pace, without thought or consideration of what the man on the street needs or wants. It is no secret that I was a big supporter of Aaron Swartz and the work he was doing to conduct a “civil disobedience” in academic publication; and I felt  a personal sense of loss and devastation when, embroiled in legal tangles, he ended his life abruptly. I have been a strong supporter of “guerrilla open access” groups that work behind the scenes to help connect academics and scholars across nations and help them out with full versions of paywalled academic articles. I also lauded Anonymous when they hacked the MIT sites as a tribute to the recently deceased Swartz. But, sometimes, it feels scary to have someone wield so much power; and the Machiavellian ploy keeps circling in one’s mind: power corrupts and absolute power corrupts absolutely. Hactivists wield absolute power in this age of digital information. And how they use that power is key in deciding whether or not it a force of evil or force of good.

So, what is your take on this? Do you think hacktivism is a good power or is it an element of anarchy just waiting to unleash chaos in our well-structured, albeit poorly-run, lives?

For me, despite these momentary vacillations between the two extreme poles, I think the perfect balance is struck by none other than Richard Feynman, one person I hold in high esteem: 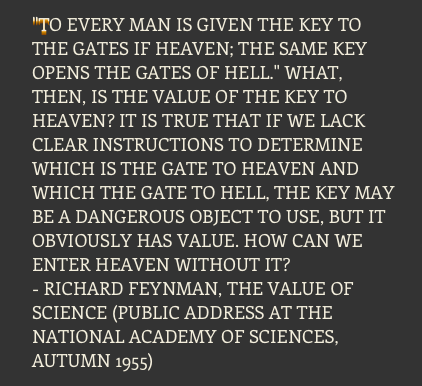