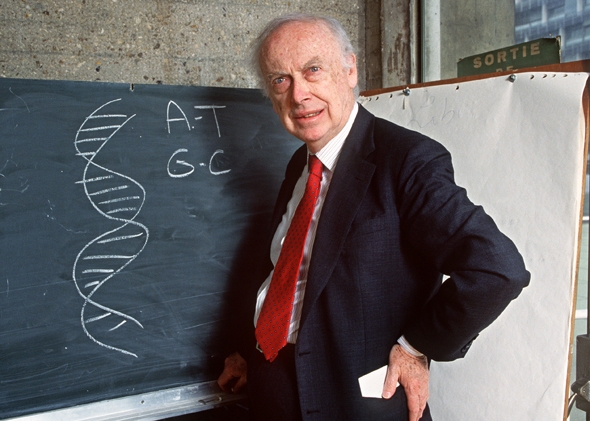 James Watson, the celebrated scientist who unraveled the mystery of the structure of the DNA, is set to sell off his Nobel Prize at an auction. If he indeed does put it up for sale, he shall be the first living recipient to have done so. Understandably, the scientific world and interverse has been set aflutter by this decision. However, even as he has created this sudden flurry of activities, it has also given rise to the wounds that he, in his profound ivory-tower-based ignorance, had propounded about seven or so years ago.

Never one to mince his words. Jim Watson has widely been regarded as an obnoxious, arrogant and self-indulgent person (even by the standards of Harvard Professors!). And this is not me, but from what one of his earliest colleagues, the Naturalist, Ed Wilson, stated in his essay in which he labels Watson as the “Caligula of Biology”! In this essay, hosted on the Michigan State University site, Ed Wilson goes on to write, in crisp, scathing words:

At department meetings Watson radiated contempt in all directions. He shunned ordinary courtesy and polite conversation, evidently in the belief that they would only encourage the traditionalists to stay around. His bad manners were tolerated because of the greatness of the discovery he had made, and because of its gathering aftermath. In the 1950s and 1960s the molecular revolution had begun to run through biology like a flash flood. Watson, having risen to historic fame at an early age, became the Caligula of biology. He was given license to say anything that came to his mind and expect to be taken seriously. And unfortunately, he did so, with a casual and brutal offhandedness. In his own mind apparently he was Honest Jim, as he later called himself in the manuscript title of his memoir of the discoveryóbefore changing it to The Double Helix. Few dared call him openly to account.

There is no doubt that alongside Crick, Watson has become a name for the ages for the glorious discovery. However, people always took issues with the greatness he achieved so early on in his career. His personal disposition did nothing to help matters either. Many in the scientific community have also taken issues with the way he slighted the contributions of Rosalind Franklin (whom he patronisingly called “Rosy”, a nickname never used or preferred by the scientist), without whose specialisation in diffraction and other imaging studies he would possibly not have been able to make the epoch making discovery.

Having made, arguably, the greatest discovery of the millennia as far as the biological sciences are concerned, he used to get away with a lot. However, it changed in 2007, when, in a Sunday Times interview, he dropped a bombshell of ignorance:

He says that he is “inherently gloomy about the prospect of Africa” because “all our social policies are based on the fact that their intelligence is the same as ours – whereas all the testing says not really”, and I know that this “hot potato” is going to be difficult to address. His hope is that everyone is equal, but he counters that “people who have to deal with black employees find this not true”. He says that you should not discriminate on the basis of colour, because “there are many people of colour who are very talented, but don’t promote them when they haven’t succeeded at the lower level”. He writes that “there is no firm reason to anticipate that the intellectual capacities of peoples geographically separated in their evolution should prove to have evolved identically. Our wanting to reserve equal powers of reason as some universal heritage of humanity will not be enough to make it so”.

This comment blew up in his face and suddenly, there was a swift fall from grace. The Board for Cold Spring Harbor Laboratory, which he powered to greatness with his inspirational leadership and fund-raising capabilities fired him for this rant despite the fact that he had served there for forty years. The NIH (where he was the boss of the Human Genome Project for a long time) and the Federation of American Scientists also washed their hands off of him. Quite quickly, from the cynosure of all eyes at biological science events, he became an “unperson”, in his own words.

However, besides being a borderline misogynist and a racist (he has apparently said that he is not a racist in the conventional way: several articles point this out. Ironic, is it not?), he has also dabbled in fat-hating and sexual stereotyping. This San Francisco Chronicle article carries coverage of his unusual take on fat people:

“Whenever you interview fat people, you feel bad, because you know you’re not going to hire them,” Watson said.

Witnesses were flabbergasted when the 72-year-old discoverer of the double helix suggested there was a biochemical link between exposure to sunlight and sexual urges. “That’s why you have Latin lovers,” Watson said. “You’ve never heard of an English lover. Only an English patient.”

However, to lent balance to the discussion, one has to take into account the angle that has been hinted at in this Time article: The mortification of James Watson. This article forwards the view that Watson is not a White supremacist, homophobic, fat-hating, misogynist bigot. He is more likely a chronic sufferer of Foot-in-Mouth Syndrome, which gets amplified every time he says something because of his extreme prominence in the field. The fact that he tended to make provocative statements to bring people out of their comfort zones and never held back in standing up for his convictions are, in many ways, admirable qualities: qualities, which, in no mean measure are responsible for him making the landmark breakthroughs he has achieved. However, the few times he did end up lending credence to unsupported theories, he ended up regretting them. The Time article apparently paints the picture of a confused old man, who wonders how things went belly-up without his intending to:

No one seems more shocked by the statements than James Watson himself. “To all those who have drawn the inference from my words that Africa, as a continent, is somehow genetically inferior, I can only apologize unreservedly,” Watson said in a statement he issued at the Royal Society Thursday. “That is not what I meant. More importantly from my point of view, there is no scientific basis for such a belief.”

On a personal note, Watson is a hero: a demo-God, whose simple, one-page paper turned the world of biological sciences, nay, even the physical and chemical sciences around; in one swift blow he and his co-researchers changed the terrain of molecular biology and redefined the way we look at life. He may have made the greatest contribution to medicine and treatment of human illnesses by uncovering the code underlying our being. Although a lot of researchers are of the opinion that he managed to push his nose ahead first using not strictly ethical means (cutting Franklin out and using her images without her permission), and that Linus Pauling and Corey would have eventually unraveled the double helix patterns from their triple string theory, the fact remains that history remembers who won the race.

However, the very fact that he commands serious respect and credibility from across all sectors of scientists is all the more reason he needs to be restrained in his expressions! His unusual stance may on some occasions have been taken out of context, but then again, at this age, it feels sad to see a scientist of such great stature resorting to such desperate measures to come out of his “ostracised” status. A plea for attention it may well be, but, it goes to show how the mighty may fall.

There has been unequivocal damning of his attention-seeking behaviour, and people have almost always been unwaveringly critical of him for his 2007 remarks (he was on a book tour: that interview cost him his jobs, he had to cancel his tour and he ended up becoming a pariah to global scientific community). I guess when someone of his credibility and credentials says something as damnable and as scientifically proven wrong as he did, connecting race with IQ, one has to keep aside their personal biases and sense of awe and admiration, and call a spade a spade. It is all the more difficult for us, who are growing up in this age of transition, where molecular biology is no longer a theoretical and laboratory subject, but an applied and clinical one as well, to not lionise this man, whose follies and foibles we do not learn of in course of our traditional, curricular training. So, I find myself condemning his words, his stance, his racist bigotry, but at the same time, my heart cries for the octogenarian genius who unraveled the DNA structure, and now has to pawn off what is arguably the crowning glory of his life, his Nobel prize, just so that people accept him and see his human side again.

What is your take?

3 comments on “To bid or not to bid: James Watson and the Noble Auction”