Salmonella enteritidis associated with consumption of affected sprouts has been running through the US for the past few months now. In the latest report, there seems to be a slowing down of the outbreak as only 19 new cases have been reported between November 25 and December 2. The epidemic curve charted over time as released by the CDC also supports this though the cases which have the period of onset in the grey zone on the right may not have been reported fully because it takes 1-4 weeks for the full reporting to happen from Day 1 of onset of a case.

These 19 new cases came from five states: Connecticut (3), Massachusetts (4), New York (9), Ohio (2), and Virginia (1). In the initial report of the outbreak (from the CDC site), there were 63 cases from ten states. The state-wise break up shows that the maximum contribution comes from Massachusetts (35) and New York (14). The total case count as of the final report is 87. But there are two things that stand out as slightly reassuring amidst this outbreak: there have been no deaths associated with the outbreak, and there seems to be no issues with antimicrobial resistance in the bacterial strains that have caused the outbreak. 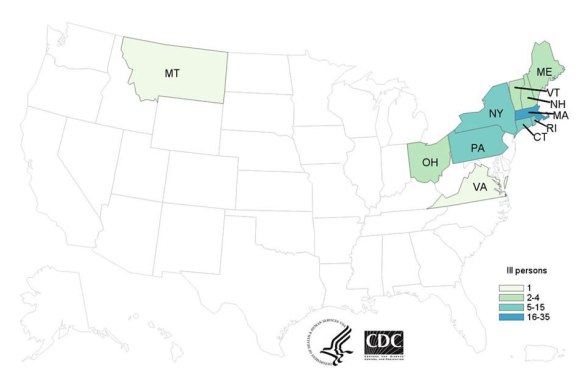 The initial work up following the reporting of the outbreak showed that amongst those who were affected, 78% claimed to have consumed bean sprouts or food servings including bean sprouts. This was significantly more than the epidemiological survey reported consumption rates of sprouts at 6% or thereabouts in the community. While this shows that robust data can ease the work of an epidemiologist, it also means that having such data in the first place is a major goal that needs reaching before efficient epidemiological surveillance and source-detection systems can be set up.

There is an indirect way of cross-verifying whether the bean sprouts are indeed the source of the problem. These products have a very short shelf life. And if the batches sent out within the period of infectivity are all removed from the market, massive public awareness is raised about the need to consume safe sprouts (or not at all, if in doubt), and early diagnosis and monitoring systems are kept in place, then, this should die out in 4-6 weeks following the recall (unless local transmission cycles are set up: that would be a different issue altogether!).