Following in the footsteps of California, Maryland has proposed, and passed, the “Keep Antibiotics Effective Act of 2017”, which bans routine antibiotic use in animals. This is a vital legislative measure to ameliorate the shocking statistics on antibiotic use which was first brought to the limelight by a 2011 report from the FDA, which stated that an overwhelming majority of antibiotics sold in the USA were destined for animal consumption. The frightening thing is that most of these antibiotics were clinically important ones in humans too, thus raising the risks of resistant infections in man.

Maryland has taken a proactive stance in this regard, through the act, which has been sponsored by Senator Paul Pinsky, Prince George’s County and Senator Shirley Nathan-Pulliam Baltimore City and Baltimore County with Delegate Shane Robinson, Montgomery County. 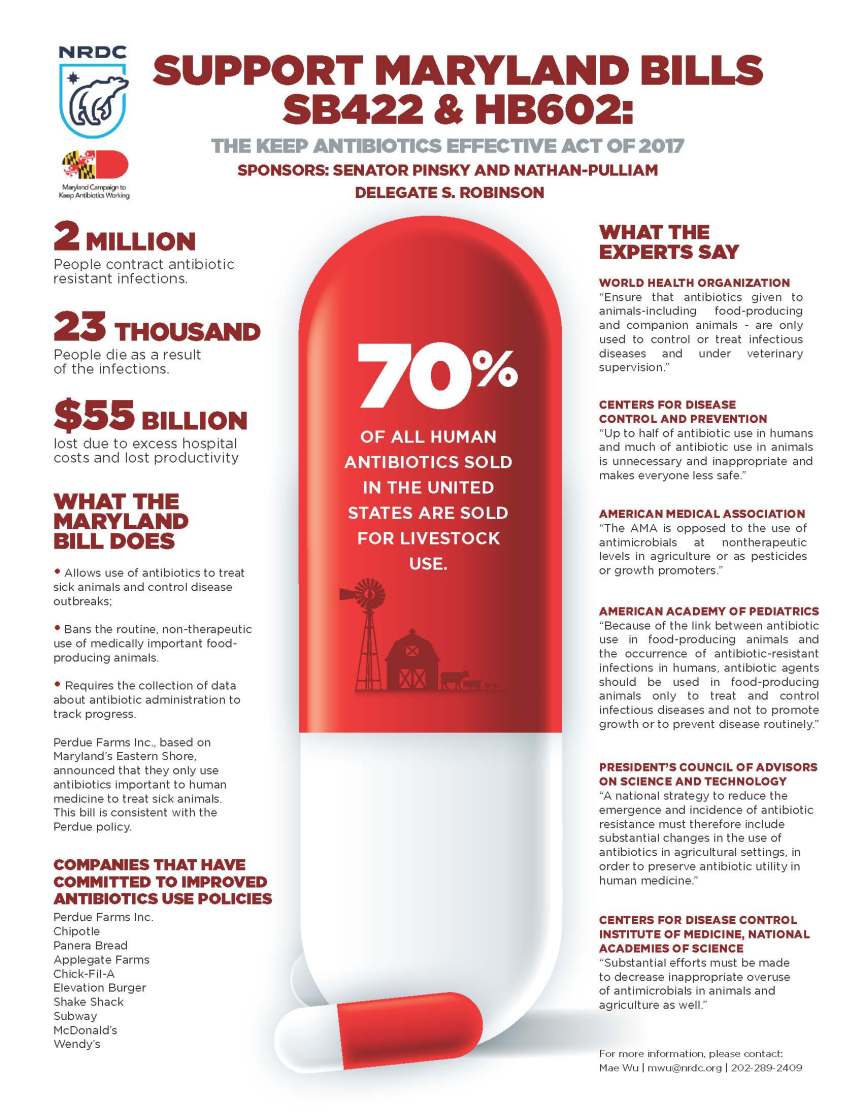 The Act has been passed by the House of Delegates by a margin of 139-1 and the Senate by 35-12. The bill restricts the use of antibiotics routinely in animal agriculture, and hence is a key step in controlling the consumption of antibiotics. However, to get it passed, the sections on data collection have been significantly watered down from the previous versions, making it very difficult to collect much meaningful data.

However, this legislative action proves a positive intent to deal with antibiotic consumption and AMR from the highest levels. The problem remains that in developing countries, where animal agriculture is done in environments which encourage the occurrence of infections in animals, routine use of antibiotics as prophylaxis or metaphylaxis has been seen to play a vital role in promoting animal growth, thereby curbing massive losses. A report by the OECD experts outlined:

The growth response to AGPs appears to be small in optimised production systems, suggesting that the economic impacts of a ban on AGPs could be limited in high-income industrialized countries but potentially higher in lower income countries with less developed hygiene and production practices. With no major changes in policy, global consumption of antimicrobials in food-producing animals is projected to rise by two-thirds by 2030, with the majority of that increase occurring in emerging economies where the demand for livestock products, especially poultry, is growing fastest.

The report further modeled the possible impact of withdrawal of antibiotics used for growth promotion in animal agriculture in various countries. The list shows startling figures, especially stark in the case of the developing nations, where the most antibiotics are consumed.

The way forward has been shown by the Maryland lawmakers. Can the rest of the developed world follow? And can they provide the leadership the developing world sorely needs to be able to curb the antibiotic consumption in animal agriculture without incurring significant financial losses?

There is a very helpful blog which has detailed the evolution of the bill and its significance. You can read the Maryland Campaign to Keep Antibiotics Working blog for more on this issue.

Image Credits: Featured Image of the AMR bug is from the JAMA Patient Page on Antibiotic Resistance

0 comments on “AMR in the USA: Maryland to Ban Routine Antibiotic Use in Animals”