USMLE in times of Trump: How did the IMGs fare this time around?

Given the stance taken by the 45th President of the United States, many graduates from International Medical Schools were apprehensive about the outcome of the USMLE match this year. The apprehensions were reflected by the fact that for the first time since 2013 there was a dip in the number of total applicants as well as active applicants for the match. The advance data declared by the NRMP, however, does not reflect the wide spread fears of programs shunning international graduates.

This year, there were a total of 10.127 Non-US citizen graduates of international medical schools. Of these, 7284 were active candidates and 52.4% of these active candidates (3814) matched. Interestingly, despite a dip in the total number of applicants, as well as active applicants, there was an increase in the number of IMGs who matched, both in terms of absolute numbers as well as in terms of proportion of active applicants. The proportion of total participants who matched is not a metric reported by the NRMP. According to that, there is an uptick as well. In 2013, 35% of the total applicants matched. This varied very little over the years: 37% (2014), 36% (2015) and 37% (2016). This year, the metric has peaked, touching 38%.

Looking at available positions per discipline, there has been a marked increase in the total positions available across the disciplines in which the IMGs usually match into: Internal Medicine, Family Medicine, Pediatrics, Psychiatry, Surgery (both prelims and categorical):

C and P refer to categorical and preliminary respectively. I have not accounted for the prelims of the other disciplines as they are very few in number.

Coming to the most vital indicator: positions per applicant (PPA). This is yet another metric that is not mentioned in the NRMP reports, but I think it makes sense to look at this to understand how competitive the various disciplines are. For this year’s match, considering the main disciplines outlined above, the PPA Stats are as below:

Considering these stats, Surgery, both categorical and preliminary, remain highly competitive across the board, with American graduates actually having fewer positions per applicant this year compared to 2016. Interestingly, there is a steep increase in positions available per applicant for IMGs when it comes to Surgery preliminary. Otherwise, surgery remains, by far, the most difficult discipline to match into out of the ones I picked up!

In all other disciplines, both IMGs and AMGs have experienced a favorable increase in the positions available per applicant. In many ways, these ratios remain significantly more favorable than the Indian PG examinee:seats available ratios.

So, to wrap this up, it seems that despite all the fears around the travel ban and the potential impact of a Republican federal government on the match statistics, there seem to have been no impact whatever, on the selection of graduates from International Medical Schools. More granular level analyses are possible, and it is quite possible that those could throw up some concerns, however, at this “ecological” level of analysis, things actually appear to be improving for IMGs. Issues related to visa and other things aside, this might have been the best match year (at least numbers-wise) in recent memory. I can think of a few other indices to compare IMGs and AMGs to understand at a closer level the impact of the current political environment on match stats. These could include a comparison of the number of interviews received per candidate as a proportion of the number of programs they applied to; the number of programs ranked by IMGs compared to AMGs; a metric of how far down the list they matched; etc. 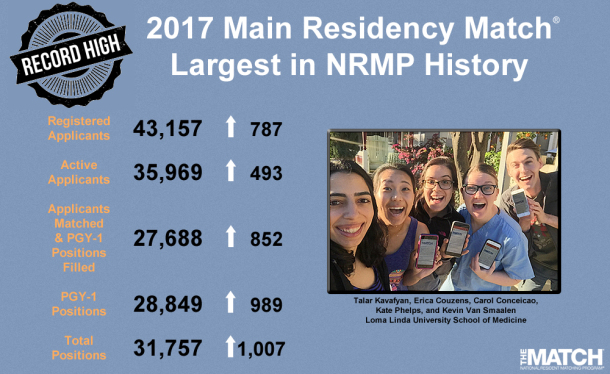 In any case, it seems that as far selection into an accredited and recognized program is concerned, match 2017 has come up trumps, pun intended, despite the political environment in the US. For all those who are wending their way to the land of dreams, may this be a little balm on the hurt that the whole process inflicts on us!